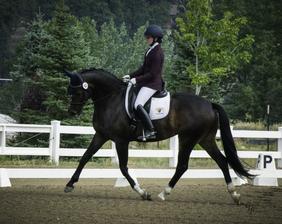 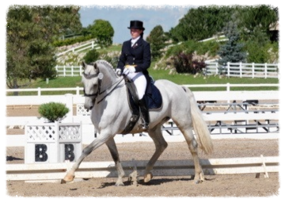 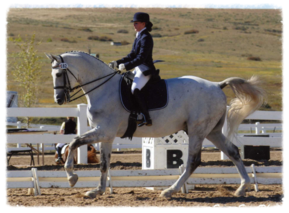 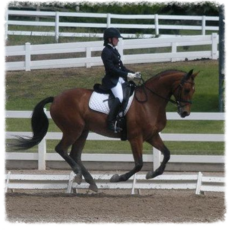 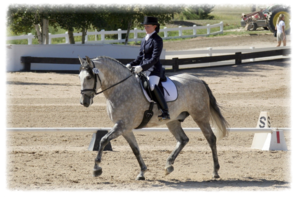 ​​​​​​​​​​​I grew up in Colorado and was first put on a horse at the age of 16 months.  At 3 years old, I started riding on my own and then began competing when I was 7.  I have fond memories of preparing for and attending shows with my barn friends and teamwork was always our first priority.  My first sho​w pony, Ka’leem, could be difficult at times, but he taught me perseverance and patience.  He is 32 years old now and is retired at a friend's house.  I have carried the lessons I learned as a junior rider into my adulthood, and often draw on my own experiences to teach and inspire my students.

I have had the good fortune of riding many great horses who have taught me so much.  They have all blessed me with some of my greatest "life lessons".

Mon Cher, aka. Mac, came into my life when I was 13, and it was on him that I had the opportunity to  advance to doing the FEI Junior tests.  That same year I was chosen to ride Mac in the Region 5 FEI Jr.YR Clinic with Conrad Schumacher.  The day Mac was sent back to his owner in Florida to be sold was one of the saddest days of my life, but I am happy to say that in 2004, my parents and I were able to purchase him.  Mac was a wonderful schoolmaster for one of my young students who earned her USDF Bronze & Silver Medals on him!   He is 28 years old this year and is now retired.

Following Mac's departure in 1999, I had the great good fortune of riding the wonderful gelding, Earl Grey.  I was sponsored by Earl's owner, Nancy Brenckman, and my 3 years riding him were filled with much learning and success.One of several horses that I have successfully rehabilitated was the Dutch gelding, Nordic ISF (x Roemer), after he suffered a serious injury followed by surgery of his stifle.  Nordic was able to return to competition and we were the 2007 RMDS Third Level Open Champion.  Nordic was eventually sold and he now lives in New England with his new owner.

For several years I trained and successfully competed on the imported PRE gelding, Mexicano XXXIV (x Rodeno) and we were USDF/IALHA Horse of the Year Champion multiple years in a row.

In 2007, I had the opportunity to ride the amazing and talented Dutch gelding, Lewis (x Uniform).  Lewis and I attended the 2007 North American Young Rider Championships as a member of the USDF Region 5 Young Rider Team.  It was at the NAYRC that I was awarded the Capt. Andrew de Szinay Memorial Award.  We finished out 2007 at 6th place nationally in the Prix St. George.

It was with Lewis that I decided that spending my days with horses--riding, training and caring for them--was what I wanted to do with my life.  Lewis had the biggest heart, and every single day with him was filled with new challenges and discoveries.  In the fall of 2007, Lewis' owner decided to sell him.  I will never forget him, with his big heart and 'never quit' attitude.

Over the years, I have won numerous Championships and Year-End Awards from Boulder Valley Dressage, Rocky Mountain Dressage Society and United States Dressage Federation Championships, Training Level through the Prix St. George.  I have earned my USDF Bronze and Silver Medals and I have multiple students that have earned their USDF Bronze & Silver Medals while training with me.  In addition, I have taken multiple students to Kentucky to compete on the USDF Region 5 Team at the NAJYRC.

I am currently working with a variety of horses and ponies at different levels, Training thru Intermediare I, and will be competing with several of them in 2016.  One of the ponies I have in training is being developed to eventually compete in the FEI Pony Tests with her young owner.  I have several students and horses in training that plan to try for the USDF Region 5 Team at the 2016 North American Young Rider Championships.  In addition to developing Jr./Young Riders, I have a wonderful group of Adult Amateurs, and their horses, that I am so blessed to get work with.

I offer both training and lessons and I enjoy working with horses and riders of all levels.  I also have extensive experience in rehabilitating horses following surgery or injury.  I believe that in teaching and in training, fairness to the horse is above all else.  My teaching and training philosophy is always geared to the best ability of each individual rider and horse.